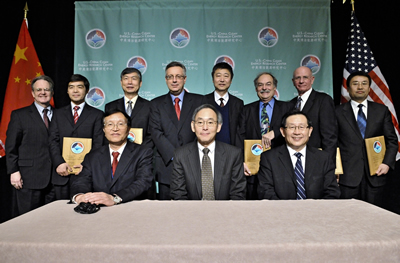 The two largest greenhouse gas-emitting nations, the United States and China, have formed a partnership to research and develop clean energy technology. Agreements formalizing the research plans of the U.S.-China Clean Energy Research Center (CERC), announced jointly by President Barack Obama and President Hu Jintao more than a year ago, were signed in January 2011 during a state visit to Washington D.C. of the Chinese President and other officials.

Focusing on three areas, building energy efficiency, clean vehicles and advanced coal technology, the Center will serve as the coordinating agency for the work of Chinese and U.S. teams in each area, with equal funding contributed by the two nations. Lawrence Berkeley National Laboratory's (Berkeley Lab's) Mark Levine will lead the buildings energy efficiency area (CERC-BEE) for the United States.

Berkeley Lab's counterpart in China is the Building Energy Research Center at Tsinghua University. Oversight of the project in China will be carried out by the Ministry of Housing and Urban-Rural Development (former Ministry of Construction).

Levine leads the China Energy Group, a research team that works collaboratively with Chinese colleagues to improve energy efficiency in China, primarily through joint policy studies and presentations to senior leaders in China. He was Director of Berkeley Lab's Environmental Energy Technologies Division (EETD) from 1996 to 2006.

"For a year since the announcement in 2009," said Levine, "U.S. and Chinese officials have worked together to develop a research plan and draft the agreements that were signed by Energy Secretary Chu and the Chinese Ministers of Science and Technology (Wan Gang) and Energy (Zhang Buobau). We're now putting the research into motion, starting up projects that will lead to new advanced technology and significantly lower carbon emissions."

Levine presented the research plan for the U.S.-China collaboration on buildings at a meeting attended by the scientific leaders and industry partners of the research effort from both countries. He thanked EETD staff member Anthony Ma for his hard work in creating the presentation and its many visual elements.

"Our goal," said Levine "is to build the knowledge, technologies, tools, and human relationships that position the U.S. and China for a future with very low energy buildings with very low carbon dioxide emissions." To that end, CERC-BEE (Buildings Energy Efficiency) plans to conduct research in four areas: monitoring and simulation, the building envelope, building equipment, and whole building efficiency. The plan includes a strong component to support commercialization of research products.

In the first year of operation, CERC-BEE plans to bring a Chinese-designed real-time energy monitoring system to the U.S. for installation and testing in buildings. Researchers, along with two of the U.S. industry partners will share and analyze the large databases produced by the real-time monitoring in Chinese and U.S. buildings.

They also plan to identify and study the energy use of buildings of similar designs, areas, and climate conditions in both countries. Researchers will analyze what elements of the buildings make them high- or low-energy consumers. Finally, the research teams will produce a compilation of emerging energy-efficient building technologies.

The U.S. and Chinese teams will collaborate on all of these efforts and on most of the other research as well.

"We place a high priority on building long-term partnerships between U.S. and Chinese researchers in the buildings energy efficiency area—this will be a significant outcome of our work," Levine said.

A final detailed work plan will be completed by March. Various research projects are in start-up mode now.

The Chinese research consortium is led by the China Academy of Building Research; Tshinghua, Chongqing, Tongji, and Tianjin Universities; and the Center for Building Energy Efficiency Research of the Ministry of Housing and Urban-Rural Development. These leading institutions will oversee other research groups.